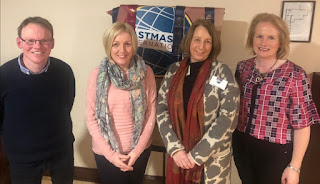 Posted by Speak Easy Toastmasters at 2:54 p.m. No comments: