SPEAKEASY   TOASTMASTERS
We had a wide range of speeches at this week’s Meeting.    Theresa O’Reilly was Toastmaster for the evening.    Anne O’Donovan was Topicsmaster and got a great response to topics ranging from “Is there one place you would never go back to?” and “Did any teacher from school impress and influence you?”  Don McSweeney was Timekeeper for the night and Liam Flynn was General Evaluator.

The first speaker was Kieran Butler with a speech titled “Connection.”   Kieran spoke about ageism in the workplace and outlined the advantages of employing an older person.   Helsa Giles evaluated the speech.

Next up was Anne Buckley with a speech titled “Different not disordered.”   Anne informed us that April is Autism Awareness Month and she outlined the various aspects of autism.  John Brennan evaluated Anne’s Speech.

Pat Sexton was next to the lectern with a speech titled “It’s about Time.”    Pat gave a strong and profound message about Time. He informed us that the past is a cashed cheque, the future is a promissory note and life is a series of now moments.  Michael Cronin evaluated Pat’s speech.

Marie Connolly was the final speaker for the evening with a speech titled “The Philosopher’s Stone.” Marie outlined the philosophy of pursing happiness through Body, Mind and Soul. She gave a very convincing presentation on how we can best achieve this.   Marie Lynes evaluated the speech.

Our next meeting is on Thursday 3rd May  at 8 p.m. in the Hibernian Hotel, Mallow. Part of this Meeting will be our AGM.   So come along and join us.   Guests are never asked to speak.
Further information on Speakeasy Toastmasters can be had by visiting www.speakeasytoastmasters.com or by contacting Marie Fitzpatrick, President (086)8548389 or Helsa Giles E.V.P (083)8858848
Posted by Speak Easy Toastmasters at 10:56 p.m. No comments:

Toastmaster of the year

SPEAKEASY   TOASTMASTERS
It was an very informative meeting this week with a wide range of speeches. Tony O’Regan was Toastmaster for the night.   Michael Cronin was Topicsmaster and kept us on our toes with topics ranging from “Now that the days are longer what are you doing?” and “TV adverts do they influence you?”   Bridie O’Connell was General Evaluator and Mary Moynihan was Timekeeper for the meeting.

John Brennan was the first speaker with a speech titled “Climate Change.”   John outlined the concept of global warming and informed us of the ways which we can contribute to reducing the carbon footprint.   Dermot Kennedy evaluated John’s speech.

Next up was Claire O’Connell with a speech titled “Where does your money go.”Claire advised us on ways to save our money. Marie Fitzpatrick evaluated Claire’s speech.

Liam Flynn was next to the lectern with a speech title “Trophic Cascade.”      He recounted how in 1884 grey squirrels were brought to Ireland from America.   However these squirrels had a virus which almost caused the extinction of the red squirrel.   But thanks to the pine marten who managed to reduce the number of grey squirrels and so facilitated the comeback of the native red squirrel.  Bobby Buckley evaluated Liam’s speech.

The final speaker for the night was Helsa Giles with a speech titled “My Hero.”   Helsa was working from the Special Occasions Manual speaking in Praise.    Brendan Foley evaluated Helsa’s speech.

Congratulations to Bobby Buckley, Pat Sexton and Marie Fitzpatrick who participated in the Division B International Speech and Evaluation Contest which took place in the Castleroy Park, Hotel, Limerick last Saturday.   Pat Sexton was placed third in the Evaluation Contest. 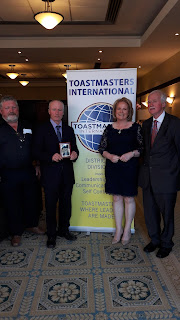 Congratulations also to Helsa Giles who received The Division B Toastmaster of the Year Award for her outstanding  contribution to the clubs in the area. 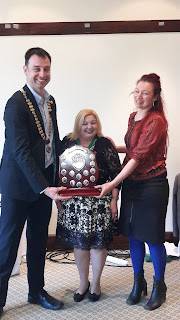 Our next meeting is 20th April at 8 p.m. in the Hibernian Hotel, Mallow.   So come along and join us.   Guests are never asked to speak. Further information on Speakeasy Toastmasters can be had by visiting www.speakeasytoastmasters.com or by contacting Marie Fitzpatrick, President (086)8548389 or Helsa Giles E.V.P (083)8858848
Posted by Speak Easy Toastmasters at 11:18 a.m. No comments: