Pupils from North Cork Secondary Schools gathered in the Hibernian Hotel. Mallow, last Wednesday evening for the Speak Easy Toastmasters Inter Schools Public Speaking Contest and what a night we had.
3 pupils from each from Scoil Mhuire,Kanturk, Davis College, St Mary’s and the Patrician Academy, Mallow presented us with an hour of fantastic speeches on a wide range of topics.

From Schoil Mhuire there was Sarah Mullane, with her speech, “A healthy mind, a healthy body”, Brian Leahy with “Over indulgence in alcohol, is it ruining the youth of Ireland?” and Conor O’Shaughnessy with,”Mobile phones, friend of foe?”

And from the Patrician Acadamy was, Peter Leahy with, “Sports Fanatics” Lorcan Nyhan with, “My Mygraine” and Sean Ronayne with, “GM is ok”

As usual the judges had quiet a task in choosing a winner but when the results were in it was Lorcan Nyhan who was pronounced the individual winner with The Patrician Acadamy taking the school prize.

Pat Sexton from Speak Easy Toastmasters praised all the contestants for their extremely high standard of speaking skills and pointed out that each and every one of the them were winners.

President Ray Ryan officiated on the night with Mary Buckley as Topicsmaster and Tony O’Regan as Contest Chair.

Speak Easy Toastmasters meet again this Thursday night at 8.00pm in the Hibernian Hotel and you are most welcome to attend.
Be assured that guests are never asked to speak at a toastmasters meeting and you may come along as a guest as often as you like.

Laughture IS the best medicine

Last Thursday night, Oct 23rd saw a large audience gather in the Hibernian Hotel, Mallow to see and support, representative speakers from all the Toastmasters Clubs in the North Cork Area as they battled it out in the Area Finals of the Humorous Speech and Table Topics Contests.

The evening kicked off at the usual time of 8pm sharp with a welcome from the host club president, Ray Ryan. Topicsmaster, Helena O’Callaghan, from The Galtees Toastmasters Club kept the audience entertained between contests and Jerry Kelleher from Speak Easy was the Contest Chair.

After a topics session to “warm up the audience” the contests got under way with the contestants in the Topics Contest leading the way.
Representing, Fáilte Toastmasters in Charleville was Stephen McKeogh, Sean Roche from the Galtees in Mitchelstown. Dave Bartly was ably representing Fermoy Toastmasters and Ray Ryan was flying the flag for Speak Easy.

Each of the contestants spoke for two minutes on a holiday preference topic and when the judging scores were counted, Dave Bartley from Fermoy Toastmasters was declared the winner with Ray Ryan from Speak Easy in 2’nd place.

After the refreshment break, the moment had arrived for the Humorous Speech Contest and when the draw for positions was made, it was Donal Jones from Fáilte Toastmasters who had the honour of starting the ball rolling which he did by having the audience “in stitches” with his speech entitled “Reincarnation”.

As we were still laughing from Donal, Brian O’Farrell, from Fermoy Toastmasters, followed with offering entitled, “Not just for Christmas”. Now our sides were really beginning to ache. Just when we thought we could take no more, up to the lectern stepped Dick Lyons, representing the Galtees Toastmasters with his speech entitled, “A good nights sleep”.

Now the tears were coming as well as the sore sides when the final speaker of the evening approached the lectern in the form of Michael Cronin of Speak Easy with, “Feel the fear and blow it up anyway”. We were on a high after listening to the three previous speakers and Michael sure kept us there.

Did there have to be a winner we wondered, but alas there did, and when the scores were counted it was Michael Cronin from Speak Easy who took the laurels with Brian O’Farrell from Fermoy as runner up.

Both Dave Bartley and Michael Cronin will represent North Cork (Toastmasters Area 17) in the Division Final in the Vienna Woods hotel on Saturday, Nov. 1st at 8.00pm sharp.

It is said, and indeed, is a proven fact that laughter is the best medicine, so over 40 happy and healthy people left the Hibernian Hotel that night after a brilliant two hours fun and laughter
with all the participants having learned their speaking skills by being a member of a toastmasters club.

Why not come and see for yourself? We meet on alternate Thursdays in The Hibernian Hotel, Mallow and our next meeting is October 30th.
Looking forward to meeting you as our guest. (don’t worry, you won’t be asked to speak)

Out and about....Speak Easy members in Limerick

Membership of Toastmasters is not all about learning to speak before and audience, it is about friendship also and we have a brilliant social scene.

Whenever there is a toastmasters event, one is sure to find Speak Easy members having a good time and the Limerick Toastmasters 25'th Anniversary was no different. 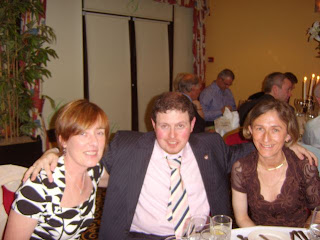 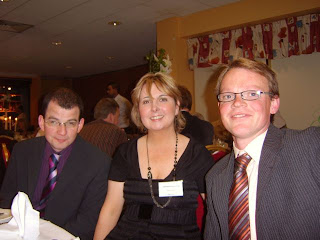 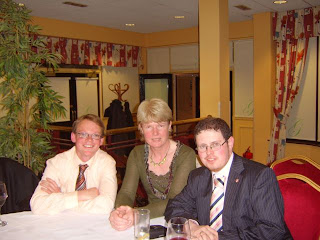 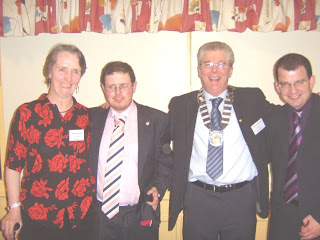 Following on from the Speak Easy Notes on Oct 7th in which we discussed the way to structure a speech or presentation with the “Opening, Body and Conclusion”, this week we look at preparing yourself to make that presentation.

How do you do that? By rehearsing.

Practice the talk until you are comfortable with it.
You won’t need to memorise the body of the talk since you already know all about the subject. As mentioned already, you should memorise your opening and conclusion.
Present the talk to a family member or friend and ask for comments.

They may give you some helpful suggestions. If you have a tape recorder, record the talk and listen to it carefully making any necessary improvements to improve your speaking ability. Rehearse as often as it takes until you are comfortable with your presentation. Use visualizing techniques in which you imagine yourself in front of your audience delivering that perfect presentation.

Another very important aspect of making your presentation is appearance.
Be well groomed and appropriately dressed. When you look right, you feel good about yourself. You will then forget about your appearance and concentrating about presenting your talk. You will have increased confidence because you know you have made a good first impression on your audience.

All these presentation skills and many more are learned and practiced at every toastmaster meeting. A toastmaster meeting is not a classroom or lectures but a workshop in which the emphasis is on mutual support, learning but most importantly on enjoyment, fun and friendship.

So why not come along tonight, 16th of October to the Hibernian Hotel, Mallow at 7.50pm and join us.

Tonight we present the Club Humorous Speech Contest and Table Topics Contest in which is one of our highlights of the toastmaster year.

Inter Schools Public Speaking Contest.
On Wednesday 22’nd October, at 8.00pm, the 3’rd annual Inter Schools Public Speaking Contest will be held in the Hibernian Hotel where pupils from the Patrician Academy, St. Mary’s and Davis College all from Mallow and Scoil Mhuire, Kanturk will be taking part in what promises, once again to be a most interesting evening..
Do come along and lend your support.
.
Remember, guests are most welcome at all toastmasters meetings so why not come along and bring a friend, you’ll be glad you did.
.
Looking forward to meeting you

The Stripper is the winner

When the members of Speak Easy Toastmasters gather at their fortnightly meeting, there is sure to be plenty of laughter and craic go leoir, but when it is their Humorous Speech Contest night you are guaranteed it.

Such was the case last Thursday night when 4 of our members vied for the winners title of Contest Winner.

There were Gerry Mulcahy with his speech, ,”The Stripper”. Joe Hassett, with , “Ye Ole Employment Fairs”. Ray Ryan with “Passengers” and Michael Cronin with “Tech Aware”

After the laughter was over and the judges made their decision it was Gerry Mulcahy who was declared the winner with Michael Cronin as runner up.

After the break came the Table Topics Contest. In this contest, the contestants get two minutes to speak on one particular topic that they have not heard of before and because of the nature of the contest they must not be in the room before they speak.
The topic was “We learn more from our failures than our successes” and when the judges had made their decision Tony O’Regan was declared the winner with Pat Duggan as runner up.

From there the winners will go on to compete in the District Finals (Ireland and UK) which will take place in Kilkenny on November 8 and 9th.
Contests in Toastmasters play a very important part in the development of speaking skills.

It is when members of toastmasters clubs can see other members in action in a contest situation and can learn by observing how the contestants have benefited by their membership of Toastmasters.

For the contestants it is a way in which we can hone our speaking skills by putting ourselves under a little bit more pressure than normal.

So to remind you, that at our next meeting on Thursday, October 16th we will have the Area Finals of the Humorous Speech and Table Topics Contests were you will be guaranteed a great night out.

You will be very welcome to come along as a guest (and why not bring a friend?). Remember that guests in Toastmasters meetings are never asked to speak and you can come to as many meetings as you like as a guest.

Hope to see you at the Hibernian Hotel, Mallow on Thursday night, October 16th at 7.50 for an 8.00pm start.