Every important journey begins with that vital first step.  Be it a mountain to conquer, a job to aspire to on a career path or even a new hobby or skill to master and enjoy. The first step of becoming a confident public speaker within Toastmasters is the ice breaker speech. The new member introduces themselves to the club with a speech length of four to six minutes. It’s not an easy thing to stand up in front of a group but it is made easier by all those friendly faces encouragingly looking back. We were spoiled at the last meeting as we had two ice breaker speeches. 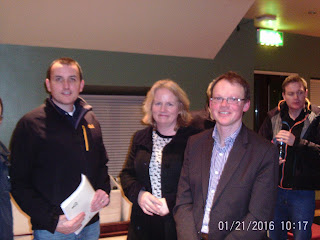 President Marie Lynes opened the meeting as she warmly welcomed everybody before passing control of the meeting to Toastmaster Dermot Kennedy who was our Toastmaster for the evening. He was ably assisted in the running of the meeting by time keeper Brendan Foley and Topicsmaster Kieran Butler.
A great Topics session was had with loads of add-ons with a wide variety of subjects ranging from David Bowie to why are female beauty products more expensive than men’s.
Michael Cronin got the ball rolling with impressive and vividly beautiful words of Carl Sagan “Pale Blue Dot”, In 1977 NASA launched a satellite and as it was leaving it took one last picture of earth. The only world we’ve ever known what a way to kick off.
New member, John Brennan was next up with his ice breaker speech which was a tale of his love of hillwalking with Kilimanjaro being one of many peaks that he’s conquered. 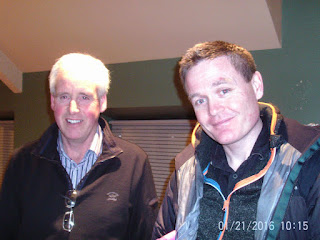 New member, Stephen O’Brien gave us our second ice breaker speech of the night entitled, ”At the Edge of my Comfort Zone”.  Stephen also took away Best Speaker Award.
Next speaker was Ann O’Donovan with her speech, “The Best Shop in Town” which persuaded us of the merits of charity shops and what one person doesn’t want can be a treasure for someone else.
Last but not least was Ray Ryan with his speech entitled,  “Same Old Bonesetter”, which was the election cry of the Claire farmers to vote for one Thomas Burke who not only had their best interests at heart but could also set bones which was a very important skill back in the 1930’s and 1940’s.
The audience showed their appreciation for 5 great speakers with a tremendous round of applause.
General Evaluator was Angela Sheehan who was very helpful and supportive with her advice to the officers and also to the each speech evaluator.
That concluded a very enjoyable meeting, well done to all who took part.
A date for the diary is February 18th  which is Club Theme Night and is going to be an evening of poetry. Everyone is most welcome and is guaranteed to be a fun evening.
If that seems too far away our next meeting is on Thursday the 4th of February in the Hibernian Hotel. Guests are never asked to speak at a Toastmasters meeting. For more information go to www.speakeasytoastmasters.com or contact Brendan Foley 087 7938641 or Marie Lynes 087 9746947

Posted by Speak Easy Toastmasters at 1:54 p.m. No comments:

There was a great atmosphere at the clubs first meeting of 2016 with up to thirty people in attendance, many of them guests for the first time. Those present were treated to wide variety of speeches and a very different and enjoyable topics session.

Club president Marie Lynes warmly welcomed everybody present and wished everyone a happy and healthy new year. Michael Cronin chaired the meeting in his role as toastmaster for the evening.

Ray Ryan was the first speaker on the night with a very informative speech about the PROBUS organisation. He clearly explained what the organisation is about and how there are many clubs both internationally and in Ireland of which there are two in the town of Mallow. Later in the meeting Ray was given a very helpful evaluation by Sean Corcoran.

The second speaker of the evening Jerry O’Callaghan enthralled all those present with his storytelling skills. He told the story about his father’s brother who died and was buried in Egypt during World War 1. He thanked the family member who researched the story of his nearly forgotten uncle and how 89 years later they travelled to his grave. It was a very descriptive and emotional story and very well told. Ann Buckley his evaluator thanked him sincerely for sharing his story.

Claire O’Connell then followed with a speech entitled “Tell me why I don’t like Monday’s”. She explained the meaning and origin of the Boomtown Rats song and how it had a very dark side which many people did not know about. Even though the song is over 35 years old it still applies as much today regarding the availability of guns in the United States today. Mary Moynihan gave Claire a very motivating evaluation.

The final speech of the evening was given by Pat Sexton. He gave a very educational and helpful speech on how members can come up with a theme for a speech which will be of great benefit to the members during 2016 and this was acknowledged by his evaluator Marie Lynes.

Following the tea break Brendan Foley took charge of the Topics Session. The topics he asked members to speak on were all quotations from films which included “to infinity and beyond” and “Life is like a box of chocolates, you never know what you are going to get”.
While the topics were challenging there was great responses with loads of humour.

The clubs next meeting will take place on Thursday 21st January. The meeting will commence at 8pm in the Hibernian Hotel Mallow. Guests are always most welcome and will not be asked to speak. For more information on toastmasters check us out on our website www.speakeasytoastmasters .com or follow us on Facebook or Twitter.
Posted by Speak Easy Toastmasters at 3:47 p.m. No comments: