All were warmly welcomed to the Inter Schools Public Speaking Contest by Speakeasy President Jerry Mulcahy. The contest was chaired by Mary Buckley.

Mr Tom Cronin, President of Mallow Credit Union presented the Credit Union Perepetual Trophy to the winners, and Ms Teresa Gore presented the Hibernian Trophy. However all the wonderful young people who participated in the annual Inter-Schools Contest were winners. It was the 7th year of the contest and as Mr Cronin expressed at the presentation, it was a pleasure to be in the audience. 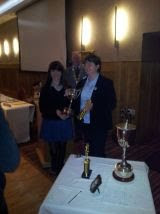 St Mary’s Secondary School, Charleville participated for the first time and their students Deirdre Costello and Esther Cahill gave us pause for thought in their speech topics. Deirdre looked at genetically modified food and Esther critiqued Irish youth and their interest in world poverty. 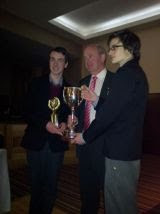 Scoil Mhuire Kanturk's students were Siobhan Gillies and Helena Egan. Siobhan examined our attitudes to mental health problems and Helena questioned our dependency on the television as the chief source of leisure.

Representing St. Mary’s Secondary School, Mallow, were Lena Diedrich and Fiona Long. Lena, a German exchange, student described the experience, in her charming speech. Fiona did make us laugh in a speech about public speaking.

Davis College were represented by Patrick Greaney and Alan O‘Keefe. Patrick gave a humorous account of Irish people and their strangely high ranking in happiness surveys! Alan gave an amusing analysis of the development of Irish technology in the leisure life of the Irish child.

The Patrician Academy was represented by Alex Notter. Alex gave a most thought provoking speech on Global Warming. 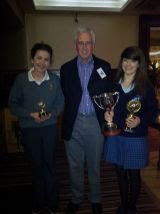 The students from the six schools provided an absorbing and entertaining evening and there was great support for each speaker. In the interval as we waited for the result, Kieran Butler chaired an entertaining topics session. 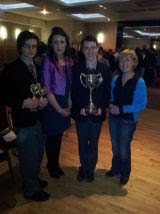 The occasion has yet again provided such pleasure and inspiration to all involved.

Speakeasy toastmasters meets at 8pm Hibernian Hotel Mallow every other Thursday, next meeting is on tonight! Thurs, Nov 29th.
Non-members are most welcome and will not be asked to speak.
Contact Jerry 0863752895,or Noel 0872427485.
"Follow us on Facebook "Speak Easy Toastmasters", on Twitter "@speakeasytm" and on our
blog "http://speakeasytm.blogspot.

This week saw another interesting and entertaining evening at Speakeasy Toastmasters. Firstly the President Jerry Mulcahy acknowledged the achievement of Speakeasy member, Pat Sexton in coming second in the International Topics Contest, which this year was held in Garryvoe on November 10th. He also reminded the audience of that great annual event, the Inter Schools Public Speaking Contest which will be held tonight Nov 22nd at 8pm in the Hibernian Hotel and is eagerly awaited. From the serious problem of what is national identity and how to maintain it, to the absolute necessity of having an imaginary companion, if in the situation where you have to eat oatmeal alone, -there was great scope in the content of the 5 great speeches. Rhona Coughlan led the way with a challenging and fresh look at national identity. Pat Sexton evaluated Rhona s speech Dave Clarke gave solid advice in a humorous manner on the pitfalls of plane travel and how to avoid them. Marie Lynes evaluated Dave's speech. Mary Moynihan in a story with the delightful title, “Blood, Sweat and Pensions, took us back to Civil War times and a tale about the Flying Columns as they were called. Pat Connoly evaluated Mary's speech Michael Dineen amazed everyone with a talk about centre of gravity. Using his knowledge, he kept an audience volunteer sitting in his chair with one finger on his forehead as an example of the force of the centre of a persons gravity. He then demonstrated how one can help a person stand without the need for lifting by using their centre of gravity. Michael Cronin evaluated Michael's speech Bridie O Connell gave a deliciously witty reading from a poem by Galway Kinell, where he suggests the need for an imaginary companion when eating porridge. In his case he suggests John Keats, who is probably ok but I suggest that the reading of Oatmeal by Mr Kinnell himself would definitely aid the digestion. Liam Flynn evaluated Bridie's speech Sean Corcoran evaluated the evaluators and the meeting as a whole, giving all positive feedback and encouragement. Our evening at Speakeasy was greatly enhanced by the efforts of Kieran Butler as Topicsmaster. James Kelleher kept a watchful eye on the timing of all contributions which is an integral part of toastmaster meetings. Pat Duggan as Ah Counter gave a humorous analysis of our usage of grammar. All were warmly welcomed by guest greeters, Marie Lynes, Mary Moynihan and Ronan Condon. Speakeasy toastmasters meets at 8pm Hibernian Hotel Mallow every other Thursday, next meeting is on Nov 29th Schools Contest tonight, November 22nd 8pm, Hibernian Hotel. Non members are very welcome to attend all meetings and will not be asked to speak Contact Jerry 0863752895,or Noel 0872427485. "Follow us on Facebook "Speak Easy Toastmasters", on Twitter "@speakeasytm" and on our blog "http://speakeasytm.blogspot. www.speakeasytoastmasters.com
Posted by Speak Easy Toastmasters at 9:50 p.m.

Mary Buckley, who 6 years ago saw the opportunity available to enhance the educational life of teenagers by facilitating a public speaking contest, invites you to this years contest. “Life is an opportunity,- benefit from it,”-this is what we offer our young people in Toastmasters. One of the highlights of the Speakeasy Toastmaster calender year is the Inter-schools public speaking competition, which is now in its seventh year. With the help and support of the Mallow Credit Union, who generously sponsor the event annually and provide the Credit Union Perpetual Trophy and the Hibernian Hotel who also provide a trophy, we are enabled to continue to host this competition, which is going from strength to strength. This competition first began in 2006 with the three second level schools in Mallow competing and “from small acorns mighty oaks do grow”. This year we have seven schools interested in competing, which includes the three second level schools in Mallow, -St Mary's secondary School, Davis College and the Patrician Academy and also schools from the surrounding areas. The Mallow Credit Union continues to recognise and support our work. Club members are willing and available to go into the schools to mentor and help the students to prepare for this contest. This has proven very successful. We believe that every child deserves a chance- and in Toastmasters we offer an opportunity and a platform for building self-confidence and self esteem in an encouraging and motivating environment. Confidence is a precious talent. We believe it is the key to success. Some people have it naturally, but for others, yes, it can be acquired. One of our youngest club members to date was a former school contestant. Today Kieran is a confident speaker and a very enthusiastic club member, and while speaking to UCC student, Kieran Butler recently, he informed me that from his own personal experiences Toastmaster is a great way for young people to find their voice, and to learn express their opinions clearly. He also said it is a very useful skill to have and the more you practice it, the more beneficial it becomes, especially when faced with interviews or even in the workplace. Yes, it is our belief in Toastmasters that by starting early, young people will acquire an ease with communication skills and public speaking which will stand to them in their oral examination and presentations in later life. Back in 2010 at our divisional conference in Dublin one of the keynote speakers from the UK encouraged all present to reach out to others in our local communities and in our schools and set up more Toastmasters groups. This in return can help to alleviate some social problems. In Speakeasy Toastmasters we believe in ourselves, and that w good self esteem and good communication skills, are a powerful academic tool which we would like all young people to have as they journey on their chosen careers. This is why we organise this competition each year. We invite you all to come along at 8pm on November22nd at the Hibernian Hotel Mallow and get a flavour of what our amazing talented young people have to offer,- a night of entertainment, education, and fun not to be missed. Speakeasy toastmasters next meets at 8pm Hibernian Mallow every other Thursday, next meeting is on tonight! Nov 15th. Guests are most welcome and are never asked to speak. Contact Jerry 0863752895,or Noel 0872427485. "Follow us on Facebook "Speak Easy Toastmasters", on Twitter "@speakeasytm" and on our blog "http://speakeasytm.blogspot. www.speakeasytoastmasters.com
Posted by Speak Easy Toastmasters at 8:59 p.m.

This week at Speakeasy, an informative and thought provoking meeting was presided over by Toastmaster for the night, Angela Sheehan, with her usual warmth. The evening began with a lively topics session. Mary Moynihan was Topicsmaster and kept members on their toes with a variety of topics, from Halloween to anti social behaviour. Non members need never worry at topics session. They will never be asked to speak but are very welcome to if they should wish to do so. There were four speeches. Club President Jerry Mulcahy gave an absorbing speech about food. He took us back in time to the “Emergency”, or World War Two, when food was rationed and many people survived through tending to plots of ground and growing their own vegetables. It was fascinating social history to hear how the “eye” of the potato was carefully planted in spring. There was no waste, the rest of the potato was eaten. The eyes or “scillains”, were watched over carefully and protected from blight and frost till time for the first harvest in July. It was a thing of pride and honour for people to produce their own food and maybe a way of life many are returning to now. Jerry O’Callaghan evaluated Jerry’s speech. Kieran Butler, in a speech called, “Languages and the urgency of Now”, gave a very interesting, and humorous speech on the need for Irish people to develop language skills to help our economy and bring us more in line with our European neighbours. He really made his point when he went “interactive” and thought us all a few words of Chinese!, Nihao Kieran! Pat Sexton evaluated Kieran’s speech. Cait Murray made a case for listening to Classical music, its benefits, and ideas on help to be got for the Classical convert. Marie Fitzpatrick evaluated Cait’s speech. Margaret O’Regan gave a very amusing speech entitled, “I knew things had changed when …”. Margaret, used very funny personal anecdotes, to show how the world moves on. Pat Duggan evaluated Margaret’s speech. Ray Ryan ably evaluated the meeting as a whole. Bridie O’Connell looked after the job of timing the speeches and the contributors to the topics session. Claire O’ Connell gave a humorous account of how she felt we all did with regard to our grammar. All were warmly welcomed to the meeting by Marie Lynes, Ronan Condon and Mary Moynihan as Sergeant at Arms. A special congratulations was made at the meeting to Pat Sexton who having won the Division A final in the topics competition, will now represent the Division at the District Final where clubs from Great Britain and Ireland compete, to be held in Garryvoe Hotel on Sat 10th November next. Coming soon on the 22nd of November will be a highlight of the club year, the annual schools contest, for the Mallow Credit Union Perpetual Trophy, -not to be missed. Speakeasy toastmasters meets at 8pm Hibernian Hotel Mallow every other Thursday, next meeting is on Nov 15th. Contact Jerry 0863752895,or Noel 0872427485. "Follow us on Facebook "Speak Easy Toastmasters", on Twitter "@speakeasytm" and on our blog "http://speakeasytm.blogspot. www.speakeasytoastmasters.com
Posted by Speak Easy Toastmasters at 7:50 p.m.