Fourteen Transition Year students from seven different schools took part in this years Schools Contest. The standard was extremely high and the judges had a very difficult task in picking a winner. Dan Webb from Nagle Rice in Doneraile won the best speaker prize with Meave Murphy from St Mary’s Charleville in second place and Carmel O’Leary also from St Mary’s in third. Best School prize also went to St Mary’s Charleville. The club would sincerely like to thank all the contestants, teachers and parents for all their effort in making such a wonderful night possible. Thanks on the night were also extended to the sponsors, Mallow Credit Union, The Hibernian Hotel and Division A of Toastmasters.

At the clubs last meeting the audience were also treated to three very entertaining speeches. James Kelleher told us about a round of golf he had that did not go according to plan. Deirdre Linehan after an absence of a number of years from the club arrived back in style with a very funny speech about becoming a grandmother. Our last speaker of the evening was Brian McLoughlin from the Mullingar Club which a speech titled “The idiots guide to getting the ring on the finger”.

This Thursday the 28th November the club will have its next meeting with a great selection of speakers appearing on the program. The meeting will begin at 8pm in the Hibernian Hotel and guests present will not be asked to speak. For more information on toastmasters check us out on our website www.speakeasytoastmasters .com or follow us on Facebook or Twitter.

It was a special occasion for the club last Thursday night as we were privileged to have two guest speakers from the Nice and Easy toastmasters club. This club is based in the Cope Foundation in Mallow and over the years it has always sent excellent speakers to the Speakeasy Club.

The two speakers on this occasion were Patrica Coleman and Michael Broderick. Patrica gave us a very informative and educational speech on the history of Buttevant town. It was a speech that was very well researched and rehearsed and was complimented on this by her evaluator Marie Lyons. Michael gave a very appropriate speech for the time of the year as he gave us his reflections on an autumn scene and also added that it will not be long before we get to enjoy spring again. Tony O’Regan gave Michael a very helpful evaluation. The club president thanked toastmaster Jerry Mulcahy who helped the two speakers prepare for the meeting. 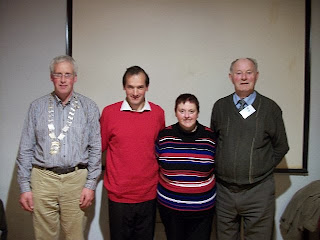 The club will host a special event on this Thursday the 21st of November in the Hibernian Hotel. It is the annual Schools Public Speaking Contest, which will have transition year students from local schools taking part. The contest will begin at 8pm and finish at 10pm. Admission is free and everybody is welcome to attend.

The following Thursday on the 28th November the club will have its own meeting with a great selection of speakers appearing on the program. The meeting will begin at 8pm in the Hibernian Hotel and guests present will not be asked to speak. For more information on toastmasters check us out on our website www.speakeasytoastmasters .com or follow us on Facebook or Twitter.

Gearing Up for Schools Contest

Club gears up for Schools Contest

This years Speakeasy Schools public speaking contest takes place on Thursday 21st November. It gives transition year students from local schools the opportunity to speak at the club. The contest is again sponsored by Mallow Credit Union and is also supported by the Hibernian Hotel. Every year the members of the club are always impressed with the high standard of speeches.

At our last meeting four of the clubs experienced members also gave speeches. Marie Fitzpatrick speech entitled ‘Diffusing Criticism’ was very interesting as it included the speech, some role play and a questions and answers session. Anne Walsh giving her first club evaluation gave Marie a thorough and helpful evaluation. Michael Cronin followed with a entertaining speech on reading at Mass. James Kelleher evaluated the speech.

Angela Sheehan then completed a toastmasters project which involved ’Presenting an award’. Angela used the opportunity to present an award which was given by Toastmasters World Headquarters to last years President and committee for their great work during the year. Claire O’Connell evaluated the speech. Our final speaker of the night was Pat Sexton fresh from his soapbox completion win at Mallow Library. He gave a very entertaining speech about all the biography’s that will appear coming up to Christmas. He questioned as to how people in their twenties could publish one and the quality of others as it seems they are just trying to cash in. Noel O’Connor evaluated Pats speech.

Bridie O’Connell as Topicsmaster hosted a very lively session with a varied selection of topics. Bill Martin as General Evaluator brought the meeting to a close. The clubs next meeting takes place on this Thursday night the 14th at 8pm in the Hibernian hotel. Everybody is welcome to attend and guests will not be asked to speak. Follow the club on Facebook and Twitter or check out our website at www.speakeasytoastmasters.com.

The clubs newer members have greatly added to our meetings in the recent past. At our previous meeting David Frawley gave an excellent first speech at the club which created a great atmosphere for the rest of the meeting. The clubs last meeting included two members who gave their second club speech and they were both very impressive.
First to speak was Breda Forrest with a very informative speech about feminism. Not only did she get the message of her speech across to the audience, she did it in a way which was very entertaining and had the audience laughing on a regular basis. Cait Murray gave Breda an excellent motivating evaluation on her speech which included some helpful tips for her future speeches.
David Roche gave a very appropriate speech for the time of the year. He spoke about while on holiday in France that he visited a number of War cemeteries. It was a very moving account which a great impact on the audience. His final line was a quotation written at one of the cemeteries which stated ‘Time will not dim the glory of their deeds’. His evaluator jerry Mulcahy thanked him sincerely for reminding us again of the sacrifices made by the people at that time.
There were four other speeches on the night and information on those will follow next week. Also the Club President Noel O’Connor congratulated Rona Coghlan on her participation in the Division A final recently and also to Liam Flynn and Pat Sexton who competed in the soapbox speech contest in Mallow. Well done again to Pat on winning and we wish him the best in the next round.
The clubs next meeting will take place on Thursday 14th November in the Hibernian Hotel at 8pm. everybody is welcome to attend and guests will not be asked to speak.