It’s been a great first half of the Toastmaster year with very enjoyable meetings at Speak Easy Toastmasters.
Our last meeting (Thursday 17th) of 2015 had a fantastic Christmassy atmosphere.  Once again our President Marie Lynes set the tone of the meeting by extending a very warm welcome to members and guests.  Our meeting planner and coordinator Theresa O’Reilly then assumed the role of Toastmaster.  Tony O’Regan was called upon to say a few words about our dear departed friend and fellow Toastmaster, Jerry Mulcahy.
We had three very fine speeches on the night and it is not possible to do them full justice in this short report but suffice to say they were a joy to listen to.
New member, Donie Turner was first to the lectern with his ice breaker “Looking Back”. Donie’s competitive spirit shone through as he kept us entertained with tales of athleticism.
Rona Coughlan donned a Santa suit for her speech entitled “Be Careful What you Wish For”.  A rhyming story with many twists and turns and let’s just say poor Mrs Clause learnt a valuable lesson in this wonderful imagination fuelled tale.
To round off the speech part of the meeting we had Michael Cronin with a tale called “Christmas Countdown”. He read a story of the Twelve Days of Christmas written by Frank Kelly which was a series of letters from Godnait O’Lunasa to Nuala thanking and then being less than impressed as pandemonium ensues.  Well worth looking up on YouTube.
The audience really showed their appreciation for the speakers.
We had a lovely relaxing second half of the meeting, munching nibbles and drinking tea in a less formal atmosphere as Topicsmaster Ann O’Donovan had us all regaling tales of past Christmas.  The quote of the night was “a boyfriend is for life not just for Christmas”.
The convivial atmosphere continued as Marie Fitzpatrick gave a comprehensive Timekeepers report. Evaluators Tony O’Regan, Tom O’Connor and Mary Moynihan were listened to attentively by the speakers as their comments were designed to praise and encourage. Brendan Foley was  our General Evaluator on the night.
Speakeasy Toastmasters will be resuming in the new year on the 7th of January, 8 p.m. Hibernian Hotel. All guests are more than welcome and won’t be asked to speak. For more information go to www.speakeasytoastmasters.com or contact Brendan Foley 087 7946947 or Marie Lynes 0879746947.
Wishing everyone a very enjoyable Christmas and new year celebrations
‘till we meet again in 2016…..

Posted by Speak Easy Toastmasters at 7:00 p.m. No comments:

The Diving Bell and Butterfly


Friday the 3rd of December saw members of Speak Easy Toastmasters and guests gather for their fortnightly meeting in the Hibernian Hotel, Mallow and what a wonderful meeting it turned out to be.
Our President, Marie Lynes

opened the meeting and welcomed everybody before she handed control for the rest of the meeting to Toastmaster, Ray Ryan.  Ray himself is a very experienced toastmaster and was previously Division A Governor (Cork/Kerry/West Limerick)

Topicsmaster for the evening was Dermot Kennedy and timekeeper was Noel O’Connor.

We had a packed and very enjoyable program with 5 speeches. First to the podium was Claire O’Connell “I was Lost Before the Dawn” she gave us her unique insights into how first impressions don’t always last after you get to know some people. Norbert Kaiser had a very apt titled speech “The Ice Breaker” always wonderful to have an ice breaker in the club especially with such a high standard already. Theresa O’Reilly with “Positive about Mental Health” doesn’t shy away from tough subjects.  She used examples of well-known people who suffer from mental health issues. Pat Sexton read an excerpt from the book “The Diving Bell and Butterfly” it was written literally in a blink of an eye. One line that really summed up this monogram was “dreams lined up like a beauty pageant”. Last but not least was Tom O’Connor’s tale of hope about Arthur Malcolm, an Australian who worked down a coal mine at twelve years of age and was an alcoholic and in jail at 15.  He went from these lows to the heights of having the word “eternity”  light up the sky across Sydney harbour in 18 meter letters.  What a evening of  great speeches. Well done to each of the 5 speakers.

On the 17th of December we have our Christmas Toastmaster theme meeting and visitors and guests are welcome to attend, so whatever the weather do come along.  Past President the late, Jerry Mulcahy last made a special effort to join us for last year’s  Christmas meeting. He will be greatly missed and are thought and prayers are with his family. He was a real gentleman that had a unique way of telling a story that would bring a time gone by to life. When we think of him it will be with a smile on are faces at all the fond memories we hold dear. We meet every second Thursday in the Hiberian Hotel at 8 p.m. For more information go to www.seakeasytoastmasters.com or contact EVP. Brendan Foley 087 7938641 or President Marie Lynes 087 9746947.

Posted by Speak Easy Toastmasters at 8:47 p.m. No comments:


Speak Easy Toastmasters Schools Contest.
Speak Easy Toastmasters annual schools public speaking contest took place last Thursday night in the Hibernian Hotel Mallow.
After 10 years this contest is still one of the most important events of the year in the club’s calendar.
A big thank you to the Hibernian Hotel for the very generous sponsorship of the use of the room for the evening which was much appreciated. The Credit Union also deserves a big thank you for its continuing sponsorship.
The audience were treated to a wonderfully diverse range of subjects and interests.
James O’Hanlon from Patrician Academy, Mallow came third with a power point presentation “Social Media or Anti-Social Media “ that many a business Mogul would struggle to equal.
Osato Mickey representing Davis Collage Mallow received second place for a speech entitled “Women’s Rights-A Pipe Dream”? She showed us what it was like to walk in someone else’s shoes.
Mark Mullins from CBS School Charleville won first prize with the winning speech entitled “Young People Should be Trusted to Vote at Sixteen”.  He gave a seamless argument and backed it up with examples of why not to be ageist.
The winning school was CBS School Charleville, Mark Mullins and Cian Cotter. Well done to all the contestants and congratulations to the winners.
The top table consisted of President Marie Lynes, Topics Master Michael Cronin and Toastmaster Liam Flynn. 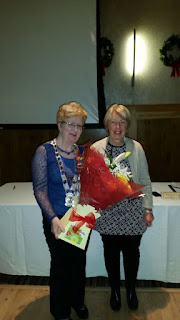 Mary Buckley was presented with a bunch of flowers as a small symbol of all the work she has put into the school competition over the last 10 years.
Thanks also to the four school coaches Marie Fitzpatrick, Tony Regan, Pat Sexton and Michael Cronin. Jerry O’Callaghan gave a few inspirational words on behalf of Mallow Credit  Union. Pat was General Evaluator for the evening.
Speakeasy Toastmasters meet on alternate Thursdays in the Garden Room  in the Hibernian Hotel at 8pm.Next meeting is on December 3rd .Come along and see for yourself, for more information go to  www.speakeasytoastmasters.com or contact Brendan Foley on 087 7938641 or Marie Lynes on 087 9746947.

Posted by Speak Easy Toastmasters at 4:29 p.m. No comments: