Wednesday 27th of March saw another brilliant meeting of Speak East Toastmasters. A meeting which had everything from Storytelling to education, plus of course, fun, laughter and what Speak Easy Toastmasters are famous for….”craic” this night we had the added enjoyment of a glass of champaign. But more about that later.

President Anne Buckley welcomed us, one and all to the meeting and introduced us to Joe Hassett, our Toastmaster for the evening. Joe guided us smoothly and efficiently through the meeting with plenty of humour as he introduced the speakers and officers.

to the lectern was guest speaker and visiting toastmaster, Dick Lyons from the Galtees Toastmasters in Mitchelstown .Dick entertained us with a light hearted storytelling project entitled, “Once upon a time”. Storytelling is something that is ingrained in us all and Dick certainly showed his talents in this skill.

Following Dick to the lectern was our club EVP (Educational Vice President) with a “Speaking to Inform” project called “The Abstract Concept” in which he had to research and organize the thought of experts on an abstract concept, theory, historical force, or social/political issue and
present the ideas in a clear and interesting manner. The title of Ray’s speech was “The Porter Diamond” which was a business concept.

Finally it was the turn of Vivien Buckley who was presenting an educational session. Vivien gave us a presentation entitled, “Don’t put them to sleep” in which she told us how to present an interesting talk to any audience taking into consideration items such as audience age and gender, educational background, and much more. Vivien emphasised her presentation with a dynamic Power Point Presentation.

A special presentation was made by the club to Mike Cronin to celebrate his winning the Mallow Sports and Leisure, Club Person/Leisure Award 2008. The presentation as made by Toastmasters International Area Governor, Pat Duggan who praised Mike for his dedication to the Speak Easy Club over the years holding many different officer roles within and outside the club. Mike replied appropriately.

After the break it was the turn of Mary Buckley who led a most entertaining topics session in which she made certain that every toastmaster present had a chance of answering a topic.

The next meeting of Speak Easy Toastmasters will take place in the Hibernian Hotel on April 3rd at 7.50 for and start.

Further information on Speak Easy Toastmasters can be had on our website www.speakeasytoastmasters.com or contact Club PRO on 086 5054784

Posted by Speak Easy Toastmasters at 7:08 p.m. No comments:

Occasionally you may be called upon to give a special kind of speech, one presented in honour of a friend, relative or co-worker. Perhaps a loved one has passed away and you will be saying a few words at the service. Or you have been invited formal awards dinner at which you will be a recipient.

Speeches such as these can be difficult to give because they often involve sentiment or special decorum. If the occasion is a sad or even a happy one, you may be hesitant to speak for fear of breaking down or inadvertently saying something that will offend. Perhaps modesty and embarrassment also contribute towards making you hesitant to accept an award.

Such speeches are indeed challenging, but you can give them successfully.

In the first project, one would present a special occasion toast. In project two, requires one to give a speech in praise of another individual. In the third project, a person can have fun participating in a “roast”. The following project asks a person to present an award to someone and finally, in the last project, one will learn how to accept an award with style and ease.

Skills such as these can come into play not just during the dramatic events of your life, but during day-to-day experiences when a special comment or reply is required. However you apply the skills acquired in The Speciality Speeches Program you will be sure to expand your presentation skills and become a proficient special occasion speaker.

The Speciality Speeches Program is just one of the many programs that are practiced by Toastmasters to hone their presentation skills. Before a Toastmaster “graduates” to the more advanced programs he/she must complete the Competent Communicator Program.

This is where the basic skills of public speaking are learned.

Of course, as well as the skills of speaking, we also practice listening or evaluating. This is how we learn to give feedback to a speaker in such a way that gives praise and encouragement but also to tactfully make suggestions for improvement.

It is now Easter week and we have just five more meetings to go before the summer break.

Why don’t you take the opportunity to come along to one of our meetings after Easter and see what we do in Speak Easy Toastmasters? You will be very welcome indeed and I will guarantee that you will enjoy the Toastmaster experience and don’t worry, non Toastmasters are never asked to speak at a Toastmasters meeting.

Posted by Speak Easy Toastmasters at 2:24 p.m. No comments: 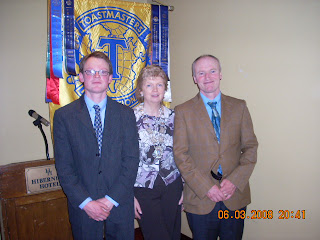 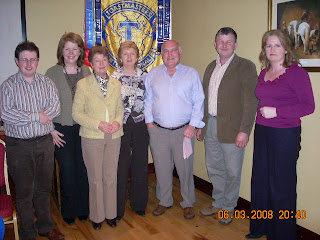 Oliver Wendell Holmes the great American physician, poet and writer once said, “It is the province of knowledge to speak, it is the privilege of wisdom to listen”. It could be argued that he was writing specifically about the Speak Easy Toastmasters Speech and Evaluation Contests which were held in the Hibernian Hotel, Mallow last Thursday night.

What a night of great speeches presented by great speakers we had. One of the purposes of speech contests is to provide an opportunity to learn by observing the more proficient speakers who have benefited by their toastmaster training.

That is certainly what happened as all the skills of great speechmaking were on show.

Pat Sexton with his speech entitled, “ Can We Do It”. Michael Cronin with, “Happiness”. Joe Hassett with, “ Overpopulation, the Real Problem”. Liam Flynn with, “The Anvil of Life” and Ray Ryan Jnr. With “Mobile Phone Hazard”

This was one of these contests where the judges are not to be envied in their job of choosing a winner but a winner had to be chosen and it was Pat Sexton who was victor on the night with Michael Cronin as runner up.

The contestants in the Evaluation Contest were Michael Cronin, Ray Ryan Jnr, Tony O’Regan, Pat Sexton and Marie Fitzpatrick and once again we were treated to an amazingly high standard. The Test Speaker in this contest was Brian McLoughlan from Mullingar Toastmasters with a hilariously funny speech entitled, “Did you hear the one about the….?” Pat Sexton was the eventual winner of this contest with Tony O’Regan as runner up.

Even though in all contests there has to be a winner but in Toastmasters Contests all contestants are winners for the commitment that is put into the preparation of their speeches.

Congratulations to all who took part.

No contest can be a success without the teamwork and attention to detail that is put into the organization of such events and congratulations to Club President Anne Buckley and EVP Ray Ryan and the team on the night. Contest Chair, Sean Corcoran, Topicsmaster, Margaret O’Regan who kept us on out toes with her topics during contest breaks,

Chief Judge, Angela Sheehan and here team who were, Counters, Cait Murray and Mary Moynahan, Timekeepers, Jerry Mulcahy and Michael Walsh and the Judges from the four North Cork Clubs of The Galtees (Mitchelstown), Fáilte (Charleville) and Fermoy Toastmasters.

Pat Sexton represents Speak Easy Toastmasters in the Area Final which will take place in the Charleville Park Hotel on March 27th.

The next meeting of Speak Easy Toastmasters will take place on Wednesday 19th (please note the change of night).

Further information on Speak Easy Toastmasters can be had on our website at www.speakeasytoastmasters.com or contact Club PRO, Sean on 086 6054784

Posted by Speak Easy Toastmasters at 8:10 p.m. No comments:

As we have been discussing in these notes over the past number of months, being a toastmaster is the best way of developing a large array of skills such as presentation, listening and evaluating, speaking off the cuff, leadership skills etc. but also in Toastmasters members like to push the boat out a little further and step outside our comfort zone.

As Edward Gibbon the English historian once said “we improve ourselves by victories over ourselves” and that really is the purpose of toastmasters contests and of course other toastmasters learn by watching the more experienced members taking part in contests.

Since Speak Easy Toastmasters was founded in 1993 members have been successful in contest at Area, Division and District contests and this success is due both to member’s dedication and club ethos.

The winners from a club contest will go on to compete at the next level which is Area level (group of 3-5 clubs in a geographical area). The winner of the Area Contest will then go on to compete in a Division Contest (group of 6-8 areas in a larger geographical area) and the winners of a Division Contest will then compete in a District Final which in our case is District 71 and encompasses Ireland and the UK.

Speak Easy Toastmasters hold their International Speech contest and Evaluation Contests on Thursday night March 6’th in the Hibernian Hotel, Mallow and “you” are welcome to come along and see club members demonstrating their speaking skills.

The next contest which will be the Area Final will take place in the new Charleville Park Hotel on Thursday March 27th . Put it in our diary now.

The Division final will be held on Saturday April 19th in the Radisson Hotel, Cork Airport.

So why not come along tonight, Thursday, to the Hibernian Hotel, Mallow and join us for the evening. Guests at our meetings are most welcome. We will serve you tea/coffee and biscuits and have a chat in our relaxed atmosphere and afterwards if you like, join us in the bar.

Further information on Speak Easy Toastmasters can be had on our website at www.speakeasytoastmasters.com or contact our PRO Sean on 086 6054784

Posted by Speak Easy Toastmasters at 6:49 a.m. No comments: