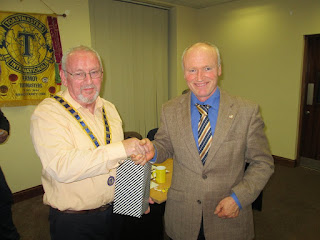 A meeting is roughly divided into four parts speeches, table topics, tea break and then for the final part the general evaluator takes charge of the meeting. All aspects of a meeting are evaluated. Evaluators have two minutes to evaluate a speech and the general evaluator, gives his or her feedback on the officers of the meeting and the evaluators. Every speech has aims and objectives and Toastmasters teaches us to listen and never lose sight of the fact that the speaker and their quest for personal improvement in their speaking skills is of the upmost importance. The evaluator offers feedback only on the speaker’s presentation, not on personality or quality’s. It’s vital that a specific improvement is sandwiched in before ending on a positive note encouraging more of the same. Also very important to be specific and encouraging and give examples of what the speaker did well. Evaluation is the corner stone of a successful toastmaster club.
Marie Lynes are president warmly welcomed guests and members and handed over control of the meeting to Toastmaster Brendan Foley who thoughtfully made a personal comment about all the speakers, which really added to the congenial atmosphere. 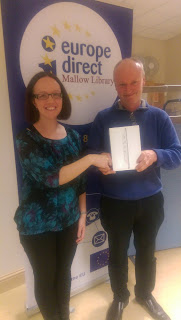 First to the floor was Michael Cronin with a very seasonal speech entitled “A Tale of Two Teeth” a wonderful tale of the origins’ of Bram Stokers life that might have inspired the infamous book Dracula. He defiantly had everyone’s hair on the back of their neck standing up and laughing at the same time.
Next was Theresa O’Reilly with a speech entitled “Legalise Assisted Dying for a Termly Ill Patient” she gave a wonderfully thought provoking speech with well researched case studies, that really helped illustrate the pro’s and con’s of this important issue.
Margaret O’Regan was are third speaker to the podium with a speech entitled “Same Care Different Century”. Insisting she’s just a quintessential Irish Mammy, but left us in no doubt that she has many strings to her bow. Her ingenious list of holiday essentials and lively illustrations made for a magical speech.
Last but not least Liam Flynn who took a fresh look at his “Ice Breaker” with over 40 speech’s and 8 years idea’s gave us a quality speech delivered with confidence, style and class. Well done to all the speakers who entertained us thoroughly one and all.
Mary Moynihan did a great job as Topics Master. Noel O’Conner was General Evaluator who epitomises what the role requires with insight and understated charm. Ray Ryan was on the clock as Time Keeper. The past week was a very exciting for Speakeasy Toastmaster Club because 3 members successfully move forward from area competition to proudly represent the club in the Humorous & Table Topics Division Final on Sunday 1st of November, Castletroy Park Hotel, Limerick .Well done to Marie Lynes who came second and Pat sexton on first place in the Table Topics Competition. Brendan Foley will be representing us in the Speech Competition. In conclusion another very enjoyable cordial evening. We will be meeting again in the Hiberian Hotel on the 5th of November at 8.00 p.m sharp. Guests are more than welcome and won’t be made speak unless they want to. For more information go to www.speakeasytoastmasters.com  or contact Brendan Foley 087 7938641 or Marie Lynes 087 9746974.
Posted by Speak Easy Toastmasters at 5:53 p.m. No comments:

The excitement echoed around the room as the judges were briefed on the rules and regulations. A number of judges come from other clubs, so that there was no bias. Marie Lynes, our president, warmly welcomed guests, members, contestants and judges alike to a wonderful night at the club for the humorous speech and table topics competition. She sincerely thanked Liam Flynn of Duhallow Landscaping for generously sponsoring the prizes. Liam is a well thought of member of the club and who, as last year’s president, brought us all on a very enjoyable outing around Millstreet in June. 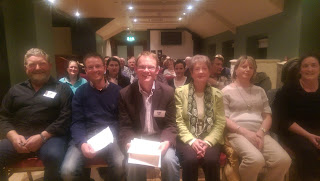 Michael Cronin was a natural choice for contestant chair as he himself has previously won the competition. Counters for the evening were Noel O'Connor and Helsa Giles who were unwavering in their mathematical skills. There were two time keepers on competition night, Mary Moynihan and Angela Sheehan. This is a very important job because the contestants can gage the time by looking at the lights.

Bridie O’Connell was topics master. When asked a topic there are a number of ways to deal with it. Pause, take a breath, and stand up slowly – a technique that gives competitors a chance to gather their thoughts. Topics are great because impromptu speaking is a transferable skill that can be put into practise in a variety of situations. Prepare an opening statement and agree or disagree with the topic. 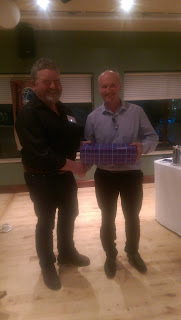 Have a joke or anecdote you would love to tell. Can you twist the topic to suit your story? The five contestants were given the topic "It's not the winning it’s the taking part" as they entered the room. They have two minutes to speak on the subject. All the contestants did wonderfully and made easy work of speaking off the cuff. It was a tightly fought competition but Pat Sexton came first and Marie Lynes second.

In the humorous speech contest we were entertained and in awe of four very talented speakers with their unique and hilarious tales.

Claire O'Connell was first up with a speech entitled "The best roller coaster ride ever". It certainly was a topsy turvy world for her leading lady as Claire gave a wonderfully confident presentation, generously seasoned with delightful ideas for example; charity, friends and location.

Pat Sexton was the second speaker with a speech imaginatively entitled "The donkey is dead or the age of chivalry is dead ". It was a tale of woe for our misunderstood hero of the piece is Don Quixote, who tried his best with modern life. Trial and tribulation increased his confusion.

Brendan Foley was third out of the gate with a speech "jumping on bandwagons" and it didn’t do him much harm as he retold his recent experiences of running. He easily had us laughing at his coping mechanisms. 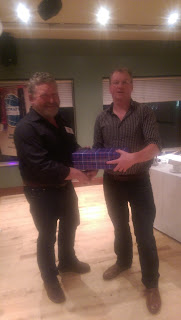 Last but not least was Bobby Buckley with "The sad search for laughter", a wonderfully thought out presentation with a garnish of philosophy. This speech was a great piece of sardonic humour.

Well done to all the contestants who entertained us thoroughly. Brendan Foley was awarded first place and Pat Sexton came second. We wish all of the winners the best of luck as they proudly represent us in area final in Fermoy on the 20th of October. Speakeasy Toastmasters will be meeting again in the Hibernian Hotel in Mallow on the 22nd of October at 8.00 sharp. Guest are more than welcome and for more information contact E.V.P. Brendan Foley 087 7938641 or President Marie Lynes 087 9746974 or the club website www.speakeasytoastmasters.com

For more photographs of the contest night check out our facebook page at https://www.facebook.com/speakeasymallow
Posted by Speak Easy Toastmasters at 7:06 p.m. No comments: