Marie Lynes, President, opened the meeting and congratulated two members of Speakeasy Toastmasters, Pat Sexton and Kieran Butler, who came first in the Area 17 Evaluation and International Contests respectively. This is a great achievement for the club.
Kieran Butler was Toastmaster for the evening, who guided the proceedings along with confidence and style. As always there is nothing like a good topics session to get everyone actively involved and thinking and speaking on their feet with naturalness and spontaneity. The hugely talented Marie Fitzpatrick as her role as Topicsmaster, gave a star performance getting everyone chatting. Brendan Foley kept us on time, in his role as Timekeeper.
We were spoiled with four great speeches. Bobby Buckley brought us back in time to his most cherished memories. He really is a joy to listen to recalling a simpler time on Muddy Hill, bringing a slice of what it was like growing up in the 1950’s.
“A Miniature Eternity” was the title of Deirdre Linehan’s Speech. She had us laughing start to finish with this hilarious tale of child minding. Taking them shopping, to chasing a rabbit she sure had a busy day.
Ray Ryan was next up “Dinner for a Penny” as the name gave a clue all about the great work Penny Dinners have done since it was established in 1888. Ray told of its origins that when it started up there was a stigma about getting something for nothing so that’s why this nominal fee was used.  We were brought up to date when they now serve 1000 meals a week.
Last but not least was Sean Corcoran’s speech “Good Vibrations”. Sean has many strings to his bow, one of them being his Banjo. A fascinating speech that was easy to understand even  by the non musical folk. He even brought his Banjo and gave us a tune which was a real treat.
The Division Final is on in the Strand Hotel in Limerick at 2pm. on Saturday the 23rd. Best of luck to Pat Sexton and Kieran Butler who have already done us proud. It would be great to have as much support as possible on Saturday.
We only have three more meetings left, the next is Thursday the 28th in the Hibernian Hotel 8p.m. sharp.  It’s Guaranteed to be a great evening’s entertainment, guests more than welcome and won’t be asked to speak. For more information go to www.speakeasytoastmasters.com or contact either Brendan Foley 0877938641 or  Marie Lynes 0879746947

Posted by Speak Easy Toastmasters at 4:19 p.m. No comments:

Some of the attendance at the Speakeasy Toastmasters Speech contest 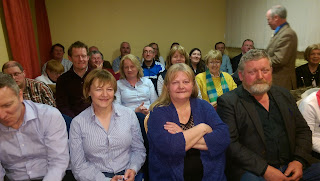 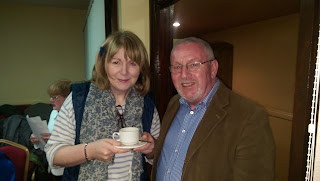 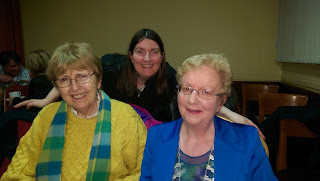 Posted by Speak Easy Toastmasters at 4:00 p.m. No comments:

In our Area Final hosted by the Failte Toastmaster Club, Pat Sexton came 1st in the Evaluation Contest and Kirean Butler came first in the International Speech Contest . They will compete in the Division Final in the Strand Hotel, Limerick @2 p.m on Sat 23rd April. Best of luck to Pat & Kieran! 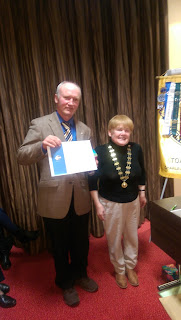 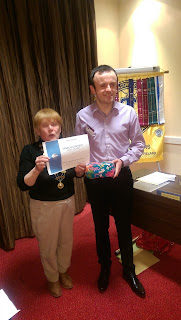 Posted by Speak Easy Toastmasters at 3:53 p.m. No comments:

There’s always a slightly different atmosphere for the annual International Speech and Evaluation competition night.  A buzz in the air, a sense of expectancy and for those not competing the joy of listening to the contestant’s as they put their best foot forward. There was a large attendance of members, guests and judges from other clubs.
President  Marie Lynes, welcomed all in attendance, before handing control of the meeting to Contestant Chair Sean Corcoran. His years as an experienced toastmaster shone through, as he made a demanding rol ook effortless.  Bridie O’Connell, Topicsmaster, entertained us with delightful Topics to warm the room before the first speaker adorned the floor.
The thought of getting up in front of a crowd and giving a speech or even saying a few words is the stuff of nightmares for many a person. In Speakeasy it’s made so much easier by the fact when you look down at the sea of people. everyone of them is looking back, willing you to. This is no differen  on contest night.
First to the arena was Brendan Foley “It all Sounds so Familiar” he took us to Holland where tulip mania, was taking place and painted a vivid picture, of how a false economy based on a mere bulb bottomed out .Then he brought it home by saying, when in 300 years somethings don’t change.
Next up was Claire O’Connell with a speech “The Lost Gifts”. A very thought provoking Speech. She even incorporated her own poem to make it even more personal. Helsa Giles “Onwards and Upwards” was an inspirational Speech message of which being nothing worth doing is ever easy, but that doesn’t mean it’s impossible.
“Leroy” was the title of Pat Sextons speech. A wonderful tale of a man he met who did not have the easiest of lives. He made him come alive as he captured the raw emotion of what its like not to have been given the best hand in life. How important it is not to judge people at first glance. Last but not least was Kieran Butler “The Single Life”, a humorous defence of the institution of singledom. 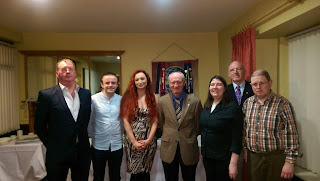 Next was the Evaluation Contest. Maire Corbett  from the Galtees Toastmaster Club delivered the test speech whom we owe a big thank you too. “Dopes” was all about the problem of doping in sports. It was then up to Ray Ryan, Claire O’Connell, Brendan Foley and Pat Sexton, to display the skills of encouragement and positive feedback, to their utmost.

Well done all who took part to make such a well run meeting. It was a hard fought battle and the winners of the speech contest were Kieran Butler and Pat Sexton and in the Evaluation Contest Pat Sexton and Brendan Foley respectively. All four will be going through to the area final in Charleville. Our next meeting will be on April 14th. Contact us at www.speakeasytoastmasters.com or contact Brendan Foley 0877938641 or Marie Lynes 087 9746947
Posted by Speak Easy Toastmasters at 3:36 p.m. No comments: