SPEAKEASY   TOASTMASTERS
It was a meeting with a difference this week.    It was a Sixties Theme night.  This meant that all the speeches and the topics were sixties related and what made it more special was that some members got dressed up to be in the spirit of the sixties.   Bobby Buckley was the Toastmaster for the evening and Theresa O’Reilly was Topicsmaster. 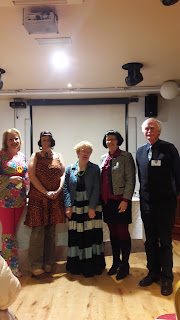 The first speaker on the night was Anne O’Donovan with a speech titled “My life in the Sixties.”    Anne recalled the big advantage of living  over the bridge in the sixties was that if the flood was out one could not get to school and if the river rose one was sent home from school.   In those days there was no park road or fly over.

Marie Fitzpatrick gave a powerful speech about life for women in the sixties compared to now. Women could not sit on a jury nor could they could into a pub only in a small section referred to as the Snug..   When women starting working they had to sign a contract that if they got married they would have to give up work.

Next to the lectern was Marie Lynes with a speech titled “The Spirit of the Sixties.”  Marie outlined the hope and expectations that people had in the sixties of life improving. 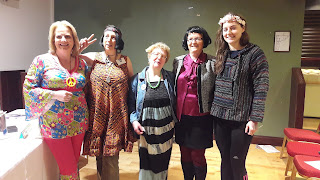 Mary Buckley gave an informative speech titled “Mass Media.”  She outlined the phone system of the time where there was local dialling and truck dialling.  Outside of Dublin all calls had to go through a local Exchange.  She also recalled the power of the Wireless during that period and also that Telefis Eireann was launched in 1961 and Ireland’s first entry into the Eurovision in 1965 with Butch Moore singing “Walking the streets in the Rain.”

Next up was Pat Sexton  who recalled the rise of the Beatles during the sixties and especially their trip to America when they were guests on the Ed Sullivan Show.   This show was watched by 74 million people and was the start of their exposure to the American market.

The final speaker was Liam Flynn with a speech titled “The Space Race.”    Liam outlined the cosmic race between Russia and America.   While the Russians  were first to space the  Americans were first to the moon..

Our next meeting is 9th March at 8 p.m. in the Hibernian Hotel, Mallow.  It is international speech and evaluation competition night   So come along and join us.   Guests are never asked to speak.
Further information on Speakeasy Toastmasters can be had by visiting www.speakeasytoastmasters.com or by contacting Marie Fitzpatrick, President (086)8548389 or Helsa Giles E.V.P (086)0762015
Posted by Speak Easy Toastmasters at 10:16 p.m. No comments:

We were both informed and entertained at this week’s  meeting.
Maire Fitzpatrick extended a warm welcome especially to Michael Collins District 71 Director who joined us for the meeting.   Toastmaster for the night was Ray Ryan and Pat Sexton was Topicsmaster.   Pat’s topics were quotes form Oscar Wilde and ranged from “A woman who would tell you her age would tell you anything.” And “ I sometimes think God in creating Man overextended himself.”  These quotes evoked a great response from the audience.

The first speaker was Maira Connolly with a speech titled “Style.”
Maira’s speech outlined the principles of styling and the importance of knowing the shape of your body.   The men in the audience were  all captivated by her presentation.  Liam Flynn evaluated Maria’s speech.

The next speaker was John Brennan with a speech titled “Kilimanjaro.”   John recalled his experience of climbing this mountain which is fondly called the Roof of Africa.  He described vividly the physical and mental challenges it involved.   Brendan Foley evaluated John’s speech.

Next to the lectern was Bobby Buckley with a tall tale titled “I am never going back.”   Bobby recounted his trip to Melbourne when the heat was unbearable and he went into battle with a huge carnivorous spider known as the Huntsman which ended in calamity.    Maire Lynes evaluated the speech.

The final speaker was Dermot Kennedy with a speech titled “Time Travel.” Dermot outlined that while this might be an abstract concept he convinced us that this is becoming increasing more probable as time goes on.    Michael Cronin evaluated Dermot’s speech.
Anne O’Donovan was General Evaluator and Claire O’Connell was Timekeeper for the night.
Our next meeting is on 23rd February at 8 p.m. in the Hibernian Hotel, Mallow which will be a Theme night – a 60s theme.  So come along and join us.   Guests are never asked to speak.
Further information on Speakeasy Toastmasters can be had by visitingwww.speakeasytoastmasters.com or by contacting Maire Fitzpatrick, President (086)8548389 or Helsa Giles, E.V.P. (086)0762015

Posted by Speak Easy Toastmasters at 4:53 p.m. No comments: