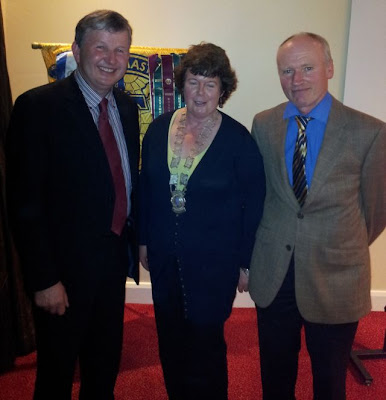 Congratulations to Tony O Regan who won the area final of the International speech contest and Pat Sexton who won the Evaluation contest in Charliville on9th April. There was a toastmasters meeting on 4thApril.There was a great variety of speeches. We had a very informative talk from Michael Dineen on strokes and what to look out for and do if you find someone getting a stroke. The second speech was from Marie Fitzpatrick on the ad vantages of making your brown bread .She outlined that we are at a loss with the closure of all the small bakeries with their variety of quality breads.
Next we had a very interesting speech from Declan Curtis on his studding and work in England called the inner child. He found that to work best with children you have to find your inner child and in doing so it also made him feel more at ease with himself. He came up with the idea that for most happiness we should walk hand in hand with our inner child.
The next speech was by Bill Martin called I hate H.R.This was a very humorous speech about his work on oil tankers and the things that can go wrong and how HR people some times don’t help
The last speech was a very colourful speech by a guest speaker from Galtee toastmasters Mary Meaney. It was the life story of her father Mick Meaney who got the world title for being buried alive about his life from Ballyporeen to working in England and back again.
Next meeting is on 19th April at 8pm in the HI Bi
www.speakeasytoastmasters.com
Posted by Speak Easy Toastmasters at 9:35 p.m. No comments:

Shut Up And Listen

On 22nd March speakeasy toastmasters held their International Speech and Evaluation contests. There were five contestants in each contest. The first speech was from Pat Connolly called the power of one; this was about the history of the Special Olympics. The main theme was that we all have the power to change the world around us.
The second speech was from Bridget Breen called Shut up and listens. This explained the difference between the male and female brain and was very humours .
The third speech was by Liam Flynn called The anvil of Life. This was about the kitchen table and all of life that goes on around it. He outlined that it was the hearth of the home and that children got a broad education around it where ideas were matured in the family.
The fourth speech was from Tony O Regan called The Bucket this was the winning speech. In this speech he looked on life as if was a bucket .The speech was very cleverly put together and very thought provoking.
The fifth speech was from Pat Sexton called A letter to Ashling .This speech came second. It was a very emotive recollection of thoughts as to our existence and reincarnation and also very thought provoking
In the Evaluation contest the contestants had to evaluate a speech by Colette Noonan from Failte toastmasters in Charleville called A certain Age. The five contestants were Pat Duggan, Pat Sexton who won, Tony O Regan, Liam Flynn who came second and Celia Cremin.
We wish the winners will have success in the area final on the 9th April in Charleville
www.speakeasytoastmasters.com
Posted by Speak Easy Toastmasters at 6:11 p.m. No comments: