Speak Easy Toastmasters meeting on September 26th was another in which guests and members both learned from, and enjoyed and enjoyed themselves.

President, Ray Ryan welcomed everyone to the meeting and promised something that we would all enjoy, How right he was.

Joining Ray at the top table was Sean Corcoran as Toastmaster for the evening and Mary Moynahan as Topicsmaster.

First to the Lectern was Jean Sayers with a speech entitled, “Time and Tide waits for no Man” in which she told us the importance of planning in our daily lives. Jean had many examples of the benefits of this and her argument was such, that we were all more than convinced.

Following Jean was Mary Moynahan with her speech, “The missing link” in which she with much humour informed us of the power of advertising in all forms of the media and how much we are affected by it. Most eye opening indeed.

Next it was the turn of Bridie O’Connell with her speech, “I spy with my little eye”. This was a most informative speech on the benefits of caring for you own eyes with rest and exercise. Bridie backed up her talk by both demonstration and audience participation.

“The Stages of change” was the title of Anne Buckley’s speech in which she, with the aid of diagrams and examples showed us how we can change any habits that we may want to. Anne concentrated on smoking cessation on the night but explained that the model can be used for any habit.

Finally it was the turn of Tony O’Regan with his speech, “So you have been asked to judge”. This speech was not about jury duty but was a humorous look on the correct way to judge a toastmasters speech contest as most members will be asked to do this at some stage.
More about contests later.

Mary Moynahan kept us on our toes with her topics session in which she has us talking about flying, praying for fine weather, flying over cities and many more, which caused great amusement.

Jerry Kelleher was General Evaluator and conducted the part of the meeting in which the speakers received feedback from their assigned evaluators who were, Ray Ryan, Noel O’Connor, Pat Sexton, Michael Cronin and Angela Sheehan.

Margaret O’Regan was Ah Counter and gave feedback at the end of the meeting on how we performed regarding the use of “crutch words” and “fillers”. I.e. um’s and ah’s and so’s.

Cáit Murray, Liam Flynn and Jean Sayers as usual did a brilliant job as Sgt of Arms.

Our next meeting is on October 2nd and is the clubs Humorous Speech Contest night. This is a night not to be missed and is one of the highlights of the year. To see what Toastmasters can do for its members come along to the Hibernian Hotel at 7.50pm on October 2nd.

Do you have goals in life?

Whatever your goals in life may be, your success depends on your ability to communicate.
Individuals who can express their ideas so that they are heard, understood, and acted upon, possess one of the primary qualities of leadershop.
To day we have numerous means of developing our confidence and assertiveness through week-end seminars and personal development courses.
By joining Speakeasy Toastmasters Club you will cover the same issues in a sociable ‘fun’ way. In fact you will be embarking on a programme that will multiply your communication and leadership skills.
Over two million people have benefited from participating in Toastmasters. You will gain those same benefits. You will at your own pace learn to overcome the initial nervousness everyone feels when called to speak before an audience. You will learn how to organize and present your ideas logically and convincingly. You will improve your listening skills.
You will develop self confidence that will radiate in every situation involving other people. Club members have a wealth of experience to offer each other. Lots of different areas are covered - Public Relations; Technical Presentations; Speeches by Management. Remember all stages are taken at your own pace- no pressure but with plenty of support. In the warm friendly atmosphere of the club, members find that they overcome nerves, gain confidence, and assertiveness. They are able to inspire and motivate their fellow workers and clients.

A Toastmasters Club is not a class room.

It is a work shop in which you will develop communication and leadership skills among a group of friends. There are two parts to the two hour meeting . First the speeches, then a break for a coffee and circulating among members exchanging ideas and building new friendships. We have had a few weddings over the years also !! The second part of the meeting contains the topic session.

This is the fun part - the topic’s master of the night asks members of the audience to speak off the cuff for two minutes on a subject.
This is usually very popular and generates a lot of laughter. Needless to mention GUESTS are NEVER asked to speak, unless they volunteer to do so. Where else could you develop life enhancing; presentation; communication and leadership skills in a friendly outgoing atmosphere?

Only at Speakeasy Toastmasters Club, MALLOW. Our 2008/09 season started on Thursday 4th September, at the Hibernian Hotel, at 7.50 p.m. We meet alternate Thursdays. So come along and we will give you a ‘cead mile failte’ when you arrive, and a cup of tea

Do remember the Toastmaster of today was once at the stage you are now. For further details visit our website www.speakeasytoastmasters.com or contact Club PRO Sean on 086 6054784.
Posted by Speak Easy Toastmasters at 12:00 a.m. No comments:

Laughing Ned and the Telescope 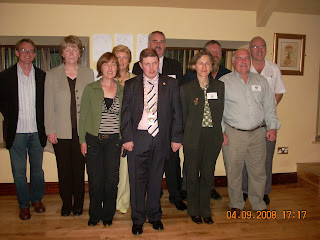 Last Thursday night, Sept 4th saw the Speak Easy Toastmasters Club get their 2008/09 season off to a fantastic start with a packed meeting in the Hibernian Hotel, Mallow.
Quite a number of welcome guests joined with Speak Easy members to see Club President, Ray Ryan open the meeting by welcoming everyone and setting the tone both for the meeting and for the
and for future meetings under his presidency.

Noel O’Connor was our Toastmaster for the evening and guided us with his usual efficiency, through the meeting, He also explained, that as well as speakers practicing their craft at toastmaster meetings, other officers and participants were also practicing how to organize and participate in meetings.

First speaker of the evening was Liam Flynn with a speech entitled, “The Telescope” which as the name suggests was a most informative speech on the history and development of the telescope and its uses, from ancient to modern times. Liam also brought, for display, a selection of telescopes, binoculars and even a periscope from a Russian tank.

Following Liam, came Tim Ahern with his speech, “This is it”. Tim reminded us of the coming dark evenings and as Toastmasters only occupied one evening and there were plenty of night courses to partake in. He demonstrated to us his hobby of furniture restoration that he learned by attending evening classes.

Third speaker of the evening was Pat Sexton with an Interpretive Reading project entitled, “Laughing Ned and Zen Buddhism” in which he challenged us to compare the lyrics of Leonard Cohen to poetry. Pat backed up his argument by reciting the lyrics of three of Cohen’s songs and we were in no doubt that indeed they were sheer poetry.

The final speaker of the evening was Assistant Division Governor, Pat Duggan who explained to the importance of members completing the new Competent Leader program and that it promoted teamwork, listening, relationship skills not only in Toastmasters but in our family, social and work situations.

Topicsmaster of the evening was Margaret O’Regan with a well thought out bag of topics which kept the members on their feet and practicing their “speaking off the cuff” skills. Margaret’s topics ranged from the weather, through crimeline, shouting at matches, coming into money and many more.

Micheal Walsh was general evaluator and gave feedback on how the meeting was run, how the participants performed and made appropriate suggestions for improvement.