At the clubs final meeting those present were treated to a very entertaining speech about holding a grudge from toastmaster Brendan Foley. Since Brendan joined the club he has shown his skill at delivering funny speeches while also including a strong message
and this speech was no different. He had the audience smiling and thinking at the same time as he told how the Irish are so good at holding grudges and that in reality it was a complete waste of time in doing so. Ray Ryan gave Brendan a very helpful evaluation.

It was a special night for Marie Lynes as she completed her tenth speech in toastmasters. On reaching this level Marie received her Competent Communicator award. The objective of this speech is to inspire the audience and this was something she certainly achieved with a very moving story. Marie Fitzpatrick as Marie’s evaluator thanked her for delivering a fine speech and for her other speeches over the past few years. 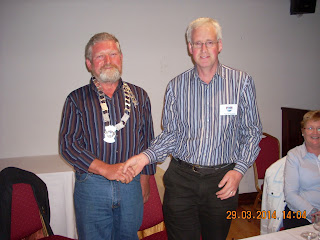 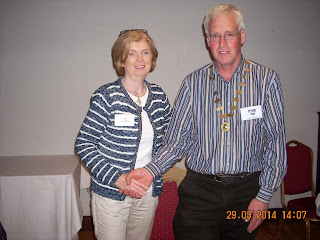 On Tour
On June 1 the club went on our Mystery Tour organised by our President, Noel O'Connor. Leaving Mallow at 1.00pm we headed east to Lismore where we were met by a tour guide and brought to the museum/interpretive center. After a most entertaining and informative audio visual show we wandered around the shop and museum before heading off to the castle gardens where we spend a pleasant and relaxed couple of hours wandering and chatting among the plants and trees. 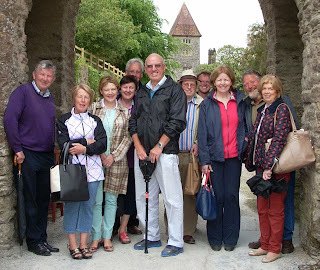 Then it was off to Mount Mellary for a couple of hours before returning for a lovely meal in Lismore.

The club are now on our summer break and will be returning in early September.
Startup dates will be announced both here and on our website shortly.

Club President Noel O’Connor concluded his very successful year as president by organising a very enjoyable mystery tour day trip. Noel kept his cards close to his chest as members were guessing as the got on the bus in Mallow as to where our destination would be. As it turned out members were treated to a lovely day out in Lismore and its surrounds. The president also ensured the weather was fine for the day. The day started with a visit to the tourist centre where we shown a very interesting film about the history of the town. This was followed by a visit to the beautiful gardens and the adjoining art gallery.

In the evening we made the short journey to Mount Mellary where some went on to make the walk to the cross on the top of the hill while the rest took the opportunity to tour the vast buildings and to hear the monks recite their prayers. The day concluded with a lovely meal in the hotel in Lismore. On the trip home incoming president Liam Flynn on behalf of those present thanked Noel for organizing a great day.

Posted by Speak Easy Toastmasters at 6:15 p.m. No comments:

Time and its meaning was the theme of Ronan Condon’s very interesting speech at the clubs most recent meeting. Ronan gave us different definitions of time and how it is used to measure and remember things. He gave a very good example of this by going through a decade of years and telling us what big events occurred on each of the years of that decade. Ronan’s speech was evaluated by Marie Fitzpatrick.

Those present at the meeting were also treated on the night by Angela Sheehan who recited some of Brendan Kennelly poems. She chose poems from his ‘Dream of a Black Fox’ collection. Helsa Giles gave Angela a very helpful evaluation. The final speaker of the night was Liam Flynn. Liam’s strong historical knowledge again came to the fore in this speech. He spoke with great passion about the plight of the landless labourer at the end of the 1800’s and how the government of the time took action in order to safeguard their futures. Sean Corcoran as Liam’s evaluator thanked him for another very informative historical speech.

The clubs next meeting will take place on Thursday May 29th. The meeting will commence at 8pm in the Hibernian Hotel Mallow. Guests are always most welcome and will not be asked to speak. For more information on toastmasters check us out on our website www.speakeasytoastmasters .com or follow us on Facebook or Twitter.
Posted by Speak Easy Toastmasters at 8:08 p.m. No comments: