Well done to Kieran Butler for being placed third out of nine speakers in the District International Speech Contest. An absolutely wonderful result reflecting a confident, well crafted Speech. Also Pat Sexton was placed second in the Evaluation Contest. The Limerick Riverside Conference was a resounding success for the club. 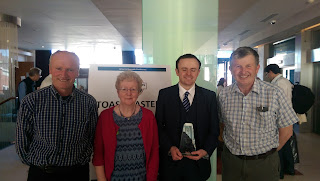 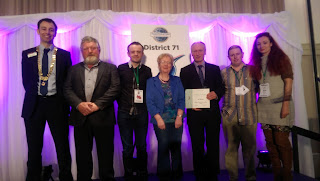 At  our following club meeting,Marie Fitzpatrick was first to the podium, with a special occasions speech all about the musically gifted Willie Clancy who at the tender, young age of 5 was an accomplished tin whistler.
Dermot Kennedy had a really interesting presentation on “Development of Computers and Future Trends” He brought us on a journey through how far computers have come, the highlight being some wonderful props including one of the first laptops.
Last but not least was Bobby Buckley doing a speech from an advanced manual, “Presenting an Award”. Bobby presented this award to his sister Patricia as a small token of thanks for being a selfless carer. A very personal, touching, tribute that was wrapped in sincerity and emotion. Three very enjoyable speeches that received a wave of applause. 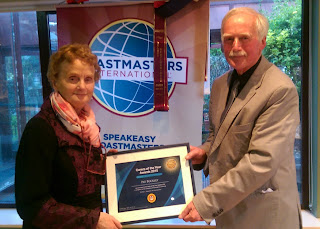 Next up was the AGM to decide the new officers for the club  President Marie Fitzpatrick. EVP Helsa Giles. PRO Ann O’Donovan. Treasurer Don McSweeny. Membership Tony O’Regan. Secretary Noel O’Connor. Sergeant of Arms Marie Lynes, John  Brennan, Theresa O’Reilly and Michael Cronin. Liam Flynn will be Area 17 Governor. Congratulations in your new Toastmasters leadership role Liam.
Only one last meeting for this season and as always guests are more than welcome and won’t be asked to speak. 8 p.m. sharp at the Hibernian Hotel in Mallow Thursday the 26th .For more information go to www.speakeasytoastmasters.com or contact Brendan Foley 087 7938641 or Marie Lynes 087 9746947

Posted by Speak Easy Toastmasters at 5:12 p.m. No comments:

It’s a really wonderful achievement to have not one but two members of Speakeasy Toastmasters. Pat Sexton will be in the District Evaluation Contest and Kieran Butler representing our club in the District International Speech Contest. We all hope its next stop Washington as a large number travel to limerick to show support and cheer on these two exceptionally talented speakers.
Marie Lynes welcomed all in attendance and organised a cake to mark the occasion of Pat’s and Kieran’s victory. Control of the meeting was then handed over to Toastmaster Don McSweeney, who was a natural at the top table. 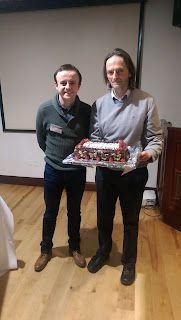 First speaker to the podium was Claire O’Connell. John Brennan then gave us a fascinating speech about the history and future of the daily newspaper as the digital age is upon us. Gerry O’Callaghan took us on vivid journey back to 1966 where he had a first-hand account of the 50th anniversary of the uprising. Kieran Butler wanted to finely hone his already hilarious “The Single Life” and get some helpful feedback off other experienced toastmasters. Last but not least was Ann O’Donovan “Take to the Water” she told of her joy of swimming and all the health benefits. Well done Ann as this is your 10th Speech and on completion will be awarded her C.C. Award a great achievement.
Margaret O’Regan took inspiration than none other than Shakespeare for her reign as Topicsmaster. Inspired she’d give a quote for example “The Game is Up”, “But Love is Blind”, “To Mine Own Self Be True” “As Good Luck Would Have It” and “Nothing Will Come of Nothing”.


Liam Flynn was time keeper for the evening and Brendan Foley gave a comprehensive General Evaluation. Only two more meetings to go as are season draws to a close but don’t let that put you off coming, guests are always more than welcome and won’t be asked to speak. Come along and then you could use the summer to mull over some speech ideas. For more information go to www.speakeasytoastmasters.com or contact E.V.P. Brendan Foley 087 7938641 or Marie Lynes 087 9746947
Posted by Speak Easy Toastmasters at 3:09 p.m. No comments: