Speech Craft rather than Witchcraft


Speech Craft rather than Witchcraft

Halloween isn't the only thing than can be scary. For many, the prospect of standing up and delivering a speech in front of an audience is truly frightening. However, in Speakeasy Toastmasters, we take the terror out of talking and turn the fear to fun. Last week's Speakeasy Toastmasters meeting was an example of this - it was a Meeting long on speech craft and short on witchcraft. Speeches spanned the spectrum from entertaining to informing to uplifting. And, once again, magic happened. 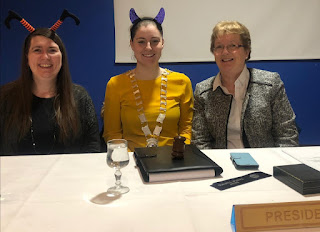 Jerry O'Callaghan had his audience in stitches with his hilarious recollection of  "A Trip of a Lifetime". It was a trip that would put the journeys of Christopher Columbus, Scott of the Antarctic and Captain Kirk of Star Trek in the shade. It was a trip to the great beyond in Sligo to a Trade Union Conference or junket! A friend offered to drive and Jerry, to his later and deepest dismay, accepted the offer. His driver was erratic at best as he exercised his fascination with looking at every tree on the journey to the exclusion of little distractions like watching the road. The inevitable puncture ensued and Jerry was called into tyre changing action in a thunderstorm. As mechanical problems emerged, a trip to a garage left a mechanic in a state of total disbelief that such a mobile catastrophe was on the road. Eventually, the hapless explorers reached their destination (unlike Captain Scott) and a wonderful "Business Meeting" ensued. And then, Jerry made his second wisest decision in his life - he took the bus home!


Rachel Liston presented a topical and informative speech - "From Cloud to Tap". She stressed the importance of water to the World and those who populate it. She described the process of evaporation and evaporation and the precipitation that is necessary to keep our reservoirs replenished. Rainfall is free but the process of bringing water to our homes is costly - a fact ignored by those who refuse to pay for the service!


The writer, Samuel Beckett, famously wrote - "Ever try, ever fail? No matter. Try again, fail again. Fail better". This was the core message of Ann Marie Lehane's Speech - "A dream". In an inspiring speech, Ann Marie spoke about the vision she had of organising a "Faith Camp" for children in her parish. Yes, there were challenges to be overcome, a few setbacks along the way but Ann Marie followed her dream. A hugely successful event was the fruit of her labours and the realisation of her worthy vision.


All three speeches were greeted with comprehensive and sensitive evaluations from the assigned evaluators - Bobby Buckley, Noel O'Connor and Marie Lynes.

Claire O'Connell was Topicsmaster of the Evening. She acted as discussion leader on a range of topics on an environmental theme. Heated and informed debate centred on questions on water quality, renewable nappies, ethical clothing and vegan diets. The purpose of the Topics Session is to provide members with the opportunity to sharpen their impromptu speaking skills. Like all aspects of the Toastmasters Programme, regular practice makes one competent at all


aspects of communication. Speakeasy has been described as "A Gym for Speakers".Regular practice achieves results. You become relaxed while speaking, you become nimble on interpersonal communication and you grow in confidence. And, unlike the Gym, the fee is small and fancy designer gear is not required.


The next Speakeasy Toastmasters meeting will take place on Thursday, 14th November in The Hibernian Hotel Mallow at 8.00PM. If you are curious about our Meetings or are interested in joining, why not come along? Visitors are always welcome and are never obliged to speak unless they wish to do so.

Comprehensive and Sensitive Michael !
Thank you.