Speakeasy President Jerry Mulcahy welcomed a group of more than 100 people this Saturday including some distinguished visitors to an evening of celebration, reminiscence and fun in honour of Speakeasy Toastmasters 20th Anniversary.

Toastmaster for the night was Michael Cronin who humorously directed the course of the evening which included some speeches and some topics around the centrepiece of a very enjoyable meal provided by the Hibernian Hotel and music provided by none other than Stanley Notte a toastmaster himself from Glanmire Toastmaster Club.

Among the distinguished guests was Mr Tom Cronin, a representative of Mallow Credit Union who generously supports the Speakeasy Schools Contest and the Mayor of Mallow Noel O'Connor. Mr O' Connor gave a warm and witty address, complimenting the club in particular on their commitment to the community through the creation of the schools contest and the creation of the Cope Foundation Nice and Easy Club, by President Jerry Mulcahy.

Toastmaster Pat Sexton gave an entertaining speech, reflecting on the clubs achievements over the past 20 years of the club, and lingering on some amusing aspects of the clubs attempts to make and break international relations, in the gatherings that occur between Irish and British Toastmaster Clubs in conferences down the years, where sing songs tended to have a slightly patriotic tinge on the Irish side of things. 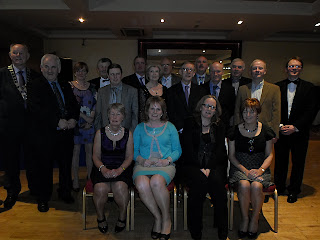 Marie Fitzpatrick literally had the crowd in stitches with a hilarious speech on her knitting of an aran jumper over a period of 14 years or so...

The final speaker of the night was a new member to the club Tom O'Connor who gave his icebreaker speech, the first speech a toastmaster makes. It was a speech full of wonderful imagery centring around the great tale from Tom's childhood of how 4 schoolboys including Tom carried a supply of art materials from one end of Mallow to the other in a box resembling a coffin and carrying it in such a manner, they had the whole town confused, blessing themselves and stopping the traffic. The schoolmaster who sent them out to deliver the materials had not envisaged such a creative journey!

Tony O'Regan gave out the topics on the night and they aptly covered happenings over the years. Ex President and Ex District Governor Jeremiah Ronayne surely would have got the ribbon on a regular night. He hadn't a clue what topicsnaster Tony was referring to in his question, but in true Toastmaster style he changed the topic and recalled a toastmaster who shan't be named, being asked what he would do if the prized canary he was charged to mind died. Said toastmaster was for once and surely once only stumped. Well... he started, I'd open the cage door and ....(long pause)..A voice raised up from the audience and shouted.. "and jump in". And so the immortal image was created of said toastmaster swinging on perch in cage.

It was fitting on the night that all 20 Club Presidents were honoured with a commerative plaque.

It was indeed a great night of fun at Toastmasters 20th Anniversary and all look forward to many years to come of this great club.

Speakeasy Toastmasters meets every 2nd Thursday in the Hi-B, next series of meetings at 8pm Hibernian Mallow April 4th, April 18th, May 2nd, May16th and May30th. Non members are most welcome and are never asked to speak. Contact Jerry 0863752895,or Noel 0872427485.
"Follow us on Facebook "Speak Easy Toastmasters", on Twitter "@speakeasytm" and our blog"http://speakeasytm.blogspot.